“Watching the creation of Terry Woodfin and Kim Pearson grow has been an immense joy and I am honored to be a part of it.” 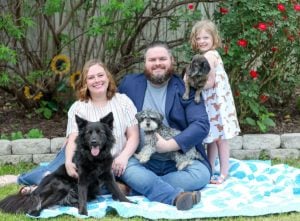 Maria first became involved with DF2FM after meeting co-founder Terry Woodfin in 2009. She was a great asset in helping DF2FM foster partnerships with local animal businesses through her employment at a veterinarian office at the time. In the early years of the organization, she was our office manager, a volunteer position. As office manager, she helped develop (and name!) our summer and winter recurring fundraising campaigns: Hot & Hungry and Cold & Hungry.
As the organization grew, so did Maria’s volunteer role. She was the first Chair of the newly created Steering Committee in 2013, before being asked shortly thereafter to become a member of the Board of Directors. Maria has served in the Vice President and Secretary officer roles of the Board. In 2020 Maria accepted the position of Operations Manager, becoming Director in 2022. 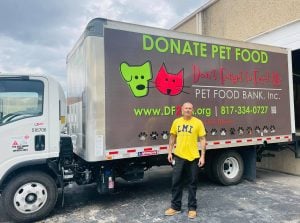 Army Veteran and Fort Worth native Dylan Reid joined DF2FM in 2021 after spending many years working in landscaping and irrigation.

Dylan is an avid animal lover, sharing his home with two dogs, one cat, and a bird! 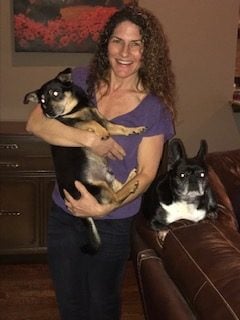 Debbie has been a volunteer with DF2FM since 2014 and is very passionate about the mission to support pets and their families in need. Previously she was our Volunteer Coordinator, at which she excelled. In 2020 we promoted her to Community Outreach Coordinator.

She was born in Texas but raised in Oklahoma, graduating from The University of Oklahoma with a BBA in Marketing.  She is married to Dan and has 3 sons, 1 daughter, 4 rescue dogs and 2 bearded dragons.  She is an avid animal lover who tries to advocate for the voiceless.  Debbie is looking forward to having a more active role in helping to provide pet meals to people in the community.